Equity market volatility picked up toward the end of the third quarter with most broad market indexes posting losses for the period.  The momentum of strong earnings growth and optimism surrounding the reopening of the economy pushed stock prices higher into late summer. However, the support for equity market prices waned in September as the Federal Reserve walked back their growth forecasts for 2022. Continued concerns over inflationary pressures and renewed fears over China’s economic slowdown contributed to equity market turbulence in a month that has historically been ranked as the weakest for equities over the past 20 years.

As the quarter concluded, markets were still very focused on the potential effects that the COVID-19 Delta variant could have on the economy’s reopening progress. But the focus shifted to the $28.2 trillion congressional debt limit being reached in August. This had many worried of a potential government shutdown should a budget resolution not be reached in time. The uncertainty surrounding the debt ceiling increase added to the volatility and price decline in equities in the final month of the quarter. This debt limit quandary along with the prospects of a $3.5 trillion budget resolution for 2022 rekindled worries of the corporate and personal tax modification that would be required to fund the increased spending.

With these debt issues still largely unresolved as we enter the final quarter of the year and given that we are quickly approaching an election year, we will be closely monitoring the outcome of these events and any potential impact that they may have on the economy.

US AND GLOBAL ECONOMY

The overall pulse of the U.S. economy continued to improve broadly despite some near-term slowing economic conditions.  GDP grew at an annual rate of nearly 6.7% for the second quarter and the third quarter estimate is expected to slow down and converge with the 2021 estimate of 5.9% as per Bloomberg L.P. A moderation in the pace of GDP growth is expected in the period following a steep recovery in economic activity.  Based on the long-term trend, we should anticipate GDP growth to ultimately slow to a rate approaching 2% in the coming years.

When looking more closely at the segments of the economy that drove growth for the quarter, the housing and personal consumption categories contributed the most to economic activity. Housing starts and building permits advanced from the prior quarter which were aided by lower rates. Personal spending managed to edge higher despite a slower than expected decline for the unemployment rate which stood at 4.8% for September.  Industrial production detracted the most from U.S. economic growth for the quarter with continued supply chain disruptions and rising commodity prices causing manufacturing productivity to decline further from the prior quarter. 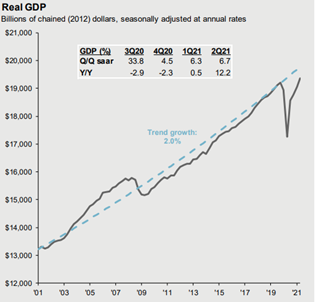 The global economy was rattled late in the quarter over concerns that the Chinese residential real estate conglomerate, Evergrande, could potentially default on over $300 billion of its outstanding liabilities.  Some analysts feared that this could even turn into China’s version of a Lehman Brothers type event.  This event not only sent shockwaves across the world’s second largest economy but also panicked the rest of the globe. Given that real estate makes up over 30% of China’s economy a default of this magnitude could put substantial strain on their recovery which is still expected to slow substantially for the year.

This is one of the two biggest problems facing the Chinese economy, the other being rising energy costs. China’s central bank believes that the Evergrande crisis can be contained.  However, this will undoubtedly put much strain on their growth trajectory in the quarters ahead. Even though we have no direct exposure to Chinese or emerging market investments as part of our firm investment policy, we are watching this development closely and its implications for other world economies.

Interest rates and inflation concerns continue to be at the forefront of economic news. Prolonged periods of above average inflation negatively affect savers as it erodes their future purchasing power. During the quarter, the Headline Consumer Price Index (CPI), which includes food and energy, rose by over 5% from the prior year. Rising energy costs contributed the most to this increase as the CPI that tracks energy was up over 24% from the prior year due to higher oil and natural gas prices. The combination of global demand returning to pre-pandemic levels along with supply constraints in European and Asian economies are the primary cause of these cost increases.

At the end of quarter, the price of crude oil settled near $75 a barrel, a price level not seen since 2018. With inventory levels expected to decline for 2021 and global production set to expand nominally in the coming year, this could add further pressure to rising energy costs.

The Fed’s response to these inflationary pressures was somewhat perplexing in their September as they kept rates in the 0 - 0.25% range.  They are expecting to maintain this range until, “labor market conditions have reached levels consistent with the Committee’s assessment of maximum employment and inflation has risen to a sustainable 2 percent and is on track to moderately exceed 2 percent for some time.”   (Source: federalreserve.gov, Sept 22,2021) 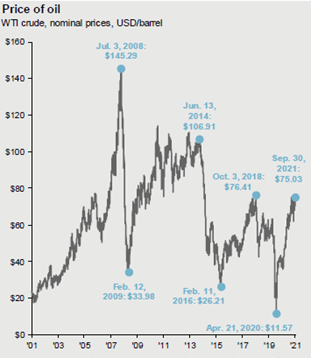 Fed watchers are keeping a close eye on any indication of when they will be tampering down bond purchases to allow for rising rates. Some are concerned that if the Fed waits too long for their employment objective to be met and keeps rates near zero, that this could lead to sustainably higher inflation.   However, in the Fed’s view, they believe that the most recent rise in the Core CPI (CPI excluding food and energy) of 4% in the past year is modestly above the long-term average of 3.8% and that this should give them a little more time flexibility in addressing inflationary pressures should they persist.

The broad U.S. equity markets were down slightly for the quarter. While most U.S. indexes posted modest gains heading into the end of the quarter, rising rates, debt ceiling concerns and some geopolitical risks stemming from China caused them to give back all their return in the final weeks of the quarter. Given that U.S. stock prices remained mostly unchanged from the prior quarter and since earnings are still expected to grow modestly in Q3, stocks may be entering a consolidation phase that could allow for their earnings and other fundamental measures to finally catch-up with the steep rise in valuations that occurred earlier in the year.

U.S. large cap stocks beat small caps for the second consecutive quarter.  Growth stocks also continued to outshine value stocks for the quarter.  However, most value stocks narrowed this performance gap toward the end of the quarter on the news of higher inflation. In particular, the cyclically sensitive sectors of energy and financials displayed an impressive recovery late in the quarter as rising energy costs and interest rates contributed to their profitability outlook. The behavior in growth and value sectors toward the end of the quarter was very similar to the behavior exhibited in the first quarter when the sentiment for the economy reopening was gaining traction.

International developed and emerging markets continued to lag U.S. markets for the quarter and year by a wide gap. Emerging markets experienced the most fallout in the wake of the China Evergrande crisis with broad emerging indexes posting nearly double-digit losses for the quarter. Although the international markets will always have some impact on global markets and the U.S., we are very pleased that our firm investment policy has excluded international equities for quite some time as we continue to believe that U.S. stocks offer a better risk-adjusted return potential given our outlook for global capital markets.

U.S. Bond yields bottomed early in the quarter, resuming their upward path from earlier in the year. As a result, the broad bond market as measured by the Bloomberg Aggregate Bond Index gave up all of its return for the quarter ending flat.  The 10-year Treasury yield finished the quarter at 1.52%.  Since the Fed is discussing tapering soon, the demand for bonds is expected to decrease, thus reducing their prices and raising their yields. Some fixed income analysts are expecting the 10-year Treasury yield to rise to 1.7% or higher. With a 2% long-term inflation rate expected a resurgence of higher yields much like investors saw in March could be possible according to the St. Louis Fed. (Source: barrons.com, Sept 28,2021)

Today’s interest rates are still historically low.  However, interest rates may be on the rise sooner than expected and during periods of rising rates bond prices tend to fall. We continue to monitor interest rate movements, but investors need to remember that bonds are still a critical component of a well-diversified portfolio.

If you look back at history, the fourth quarter is usually a positive one for investors as the fourth quarter has empirically been the best for equity markets. According to Truist Securities data, even though October is typically a very volatile month, stocks have risen 79% of the time in the fourth quarter since 1950, with an average gain of 4%. (Source: barrons.com, Oct 5, 2021)

There are still many key factors that could affect what direction equity markets will move in the final quarter of 2021. As previously mentioned, rising inflation expectations, impending interest rate policy changes, the U.S. debt ceiling and spending bill deliberations, potential changes to tax laws and continued COVID-19 concerns will continue to be major factors in the quarters ahead.

September and October have historically been difficult months for investors. Overall, 2021 has been a positive year for equity investors and historically, a positive first half of the year has traditionally brought a positive second half.  Historical results are never an indication of future results and we believe that investors should always use their long-term investment goals as the primary motive behind adjusting risk levels in their portfolio.

Medicare Open Enrollment is here!  The Medicare Open Enrollment begins annually on October 15th and ends on December 7th.  During this period, Medicare-eligible individuals aged 65+ can sign-up for Medicare plans, switch plans, or leave a plan (an individual’s Initial Enrollment Period begins three months before the month an individual turns age 65 and ends three months after the month an individual turns 65).   This is also an excellent opportunity to start thinking of Pro-active tax planning to help lower your Medicare premiums in retirement.

Unlike your annual tax bill, Medicare Part B & Part D premiums are calculated using income brackets based on your taxable income from 2 years ago. In addition, if your Modified Adjusted Gross Income(“MAGI”) during this period is above a certain level, you will pay an extra charge named “Income Related Monthly Adjusted Amount” (or“IRMAA”).

It is important to note that having a MAGI just $1 above the applicable income bracket, will subject you to an increased Medicare premium for the entire year.  For example, if you file a joint return and your MAGI is even $1 above $222,000, you will pay an additional $1,069.20 in additional Medicare Part B premium annually. This cost can be even higher if you have a Part D plan, which are also subject to IRMAA charges.

Proactively managing your income in anticipation of Medicare premiums is essential, especially for those individuals who may have sizeable pre-tax retirement accounts that will be subject to ever-increasing Required Minimum Distributions(“RMDs”).   This process starts at the age of 63 - 2 years prior to the age of 65.

Here are some tips to help lower your Medicare Premiums in the future:

Whether you are seeking tax strategies, estate planning, or a financial plan, our advice is not one-size-fits-all.  We are ready to provide you with financial solutions to achieve a better retirement.  We will always consider your feelings about risk and the markets and review your unique financial situation when making any recommendation.