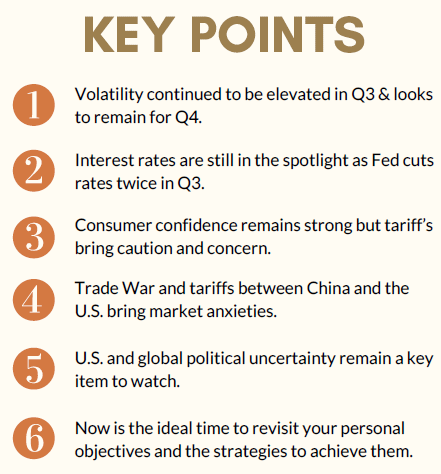 After some concerns and declines during the summer, major equity markets showed advances in the month of September and finished positive for the third quarter of 2019. The S&P 500 ended the month about 1.7% higher, and up by 1.2% for the quarter. The Dow ended 1.9% and 1.2% higher for the month and quarter, respectively. (Source: Yahoo Finance 9/30/2019)

Some prominent investment themes from earlier in the year continued to surface in the third quarter producing volatile trading, but at the quarter’s end had no real impact. The U.S.-China trade conflict continued to capture investors’ attentions and fluctuated equity markets. The quarter also included the Federal Reserve’s lowering of rates in September for the second time this year. The combination of these events with slowing global economic growth and interest rates produced an inverted yield curve, which is a sign for some of economic downturns. Despite all of this, equity markets still rewarded patient investors. (Source: Morningstar.com 9/30/2019)

In a quarter ending news release, the NASDAQ stated that, “As investors prepare for U.S. corporations to report financial results next month, they could look past recent sluggish growth and find comfort as earnings look set to rebound after the third quarter.”

Some strategists argue that just a small amount of economic growth should be enough to support better profit growth, which could help justify high market valuations. "People are overestimating the negative from trade and underestimating the lagged response from a lot of policy easing," said Jim Paulsen, chief investment strategist at The Leuthold Group in Minneapolis. "It could affect what corporations say when they look ahead," he said. Recent economic data has been mixed, with reports on U.S. labor and housing upbeat, but others disappointing. (Source: NASDAQ.com 9/30/2019)

Investors are still enjoying the longest bull market ever, but two camps of thought still continue to exist. One camp points to the fact that based on historical numbers, like price earnings, that equities are highly overvalued and overpriced. The other camp insists that we are still in a “TINA” market, meaning, There Is No Alternative to stocks. This group feels that until rates rise significantly, this will remain true and that means there could be significant upside in the current market. Equities are not cheap and even the savviest of investors need to have a watchful eye on risk. As financial professionals, we assist clients by providing ideas and suggestions based on their personal circumstances. Short-term interest rates and cash equivalent yields are still historically low. Our goal is to focus on each client’s timeframes and  goals.

INTEREST RATES ARE STILL IN THE SPOTLIGHT

On Wednesday, September 18, the Federal Reserve lowered interest rates for the second time in the third quarter by 25 basis points down to a range of 1.75-2%. This reduction was after a similar rate cut as a result of their July session. Prior to July, the Fed had raised rates over nine times since December 2015. The reasoning for this most recent rate cut was weakening exports and low inflation. This quarter’s two rate cuts were the first time in over a decade that the Fed lowered interest rates.

Despite low unemployment rates, robust job gains and strong household spending, the central bank’s monetary policy committee stated, “…business fixed investment and exports have weakened. On a 12-month basis, overall inflation and inflation for items other than food and energy are running below 2 percent.” (foxbusiness.com 9.18.2019)

Fed Chairman Jerome Powell reaffirmed that the Fed will, “act as appropriate to ensure that the expansion remains on track." It appears that the Fed made this recent rate cut as a proactive move toward  ensuring the economy remains on the road to recovery.

Interest rates will continue to be on the forefront of our “watch” list.

A notable point for the third quarter is that in September, U.S. consumer confidence fell to 125.1, down from 134.2 in August. This drop was the biggest in nine months. Lynn Franco, Senior Director of Economic Indicators at the Conference Board stated, “The escalation in trade and tariff tensions in late August appears to have rattled consumers.” He continued, “However, this pattern of uncertainty and volatility has persisted for much of the year and it appears confidence is plateauing.” Franco continued, “Consumers were less positive in their assessment of current conditions and their expectations regarding the short-term outlook also weakened. While confidence could continue hovering around current levels for months to come, at some point this continued uncertainty will begin to diminish consumers’ confidence in the expansion.” (CNBC.com; 9/24/19; Bloomberg.com 9/24/19)

Despite the dip in consumer confidence, the trend still appears to be that the consumer will support the current U.S. expansion, although spending may be more moderate.

In brief, a “normal” yield curve has an upward arc. An inverted yield curve is just that, a curve that slopes downward. This shows that interest rates on short-term bonds is higher than some longer-term bonds.

In August, for the first since 2007, the spread between the 2-year and 10-year treasury yields turned negative. The 30-year treasury bond yield dropped below 2%. Historically, this has transpired prior to every U.S. recession in the last 50 years. (foxbusiness.com 9.18.2019)

This inverted yield curve lasted briefly but the theory behind what it potentially hails has resonated in the minds of many investors. The media is doing an excellent part in keeping the fear of a recession at the forefront of many investor’s thoughts. With talks of economic slowdowns and future concerns, investors need to prepare and proceed with caution. 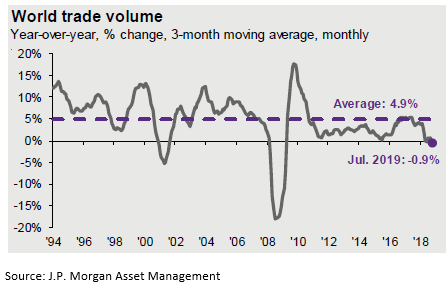 The third quarter of 2019 opened with the yuan, China’s currency, falling below 7 yuan to the U.S. dollar. This was the first time since 2008. This drop was as a result of President Trump threatening to add an additional 10% tariff on over $300 billion worth of Chinese imports. This set the stock market into a fast plunge of over 950 points on August 5, the steepest drop yet in 2019. This dive also marked the sixth biggest point drop in the DJIA’s 123-year history. (nypost.com, 8/2019)

Then in September, the President excluded hundreds of items from the 25% duty imposed on Chinese imported goods. This brought a calmer response from traders. (Bloomberg.com 9/30/19)

Tariffs and trade issues could affect equities, so investors should continue to monitor them. The U.S. and China are the world’s largest economies and a disruption in their symbiotic relationship could affect economies globally.

In addition to the ongoing trade wars, the United Kingdom is set to leave the European Union (EU) on October 31. How Brexit may affect global markets is still of concern and an item that needs to be carefully watched.

Political uncertainty, including the 2020 elections, also need to be watched. As financial professionals, our primary focus is on how the political landscape affects investment markets. We will be keeping an eye on global activities and how it may affect you.

Weak corporate profits could be what finally convince investors to start pulling back on stocks, especially if companies start to lower their outlooks for the fourth quarter and 2020. The ripple effect of the trade war and tariffs is seeping into U.S. corporate earnings and therefore they need to be watched carefully. (CNN Business 9/30/2019)

The month of October has seen five of the stock market’s worst 10 days, including 1987’s more-than 20% single day drop. However, overall, October typically ends as an average month for the market.

What will the last quarter of 2019 bring?

As shown in the chart of monthly market volatility, which tracks the standard deviation of daily returns of the S&P 500 dating back to 1928, October has historically been the most volatile month for U.S. equity markets.

STRATEGIES FOR INVESTORS DURING MARKET VOLATILITY

With fall being a historically volatile time period, we think it could be helpful to continue our theme of sharing strategies to consider during volatile times.

Revisit your financial goals and objectives.

Always allocate your investments to match your risk tolerance.

During volatile times, it is always wise to have realistic time horizons and return expectations for your own personal situation and to adjust your investments accordingly.

Our advice is not one-size-fits-all. We will always consider your feelings about risk and the markets. We'll review your unique financial situation when making recommendations. If you would like to revisit your specific holdings or risk tolerance please call our office or discuss this at our next scheduled meeting.