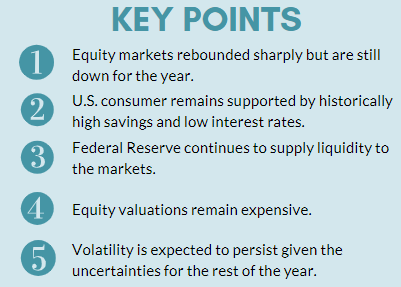 Broad US equity markets reversed course from the steep declines incurred in the 1st quarter. Although small-cap and international indexes attained similar results for the quarter, global stocks are still markedly down for the year.

Given the unprecedented shutdown of the global economy, it has been somewhat perplexing to many economists and analysts that markets were able to stage such a strong recovery from the March lows despite the crippling impact that the COVID virus has had.

The Fed’s behemoth monetary intervention coupled with the government’s fiscal response via the CARES Act have certainly been the key drivers behind this divergence and there are some signs that the economy may be bottoming.  However, given the unprecedented nature of the pandemic and the recent reports of increasing cases in the U.S., there remains much uncertainty about the path of the recovery in the quarters ahead.

The U.S. Federal Reserve held rates at zero at their June meeting in concert with other developed market central banks. The Fed continued its plan of quantitative easing (QE) by purchasing an assortment of treasury, mortgage-backed and corporate bonds to help bolster liquidity and lending for both corporate and individual borrowers.

Their balance sheet of bond purchases increased by nearly $1.2 trillion for the quarter making the total increase for the year nearly $3 trillion. The total balance sheet now stands at over $7 trillion, the highest level since the Federal Reserve began publishing this data. With the Fed’s recent actions, many have become concerned that there are no policy tools left to combat a resurgence of the pandemic leaving some to believe that the Fed may look to emulate negative interest rates like Japan and Europe. These fears were quelled by many Fed members stating that negative rates would not be a policy tool and that there were other quantitative purchases that they could entertain should weakness persist.

US AND GLOBAL ECONOMY

According to the Atlanta Fed’s GDPNow estimate, U.S. GDP is expected to decline by 12.1% for the second quarter. However, with state economies coming back online as well as the unprecedented fiscal and monetary policy, many economists are expecting the decline in GDP to moderate to just a 6.5% loss for 2020 as GDP rebounds in the second half.

The rate of unemployment spiked to over 25 million (14.5%) in April caused by the forced shutdowns of states. However, this number fell to 13% in May as quarantine measures were lifted allowing many states to gradually kick-start their economies.

Personal savings surged to over $6 trillion in April to a record high thanks to the stimulus money and additional unemployment benefits that were provided through the CARES Act. This has allowed many Americans to deleverage themselves as evidenced by the stark drop in credit card balances. The betterment of the consumer balance sheet could very well set the stage for a meaningful broad recovery once we can get past the residual effects of the current pandemic.

The historical drop in mortgage rates has also been a boon to the consumer and broad economy. U.S. 30-year mortgage rates averaged 3.24% for the quarter which lead to a drastic increase in home refinancing and home purchase activity compared to the 1st quarter. With the Fed maintaining its mortgage-backed security purchases for the foreseeable future, many expect that rates could fall modestly from where they ended the quarter.

Both global manufacturing and service-based growth rebounded sharply for the quarter. These readings have managed to stage a very sharp rebound from the lows experienced last quarter.

Many equity analysts believe that the move in equity prices for the quarter has been too far and too fast. Equity valuations are now more expensive than at the February top with the S&P 500 trading at almost 22 times forward earnings. However, some investors believe that valuations are a result of two dynamics: the unprecedented liquidity that has been provided by the Fed and the TINA notion, meaning There Is No Alternative to stocks. The TINA crowd feels that low interest rates make stocks more attractive from both a yield and appreciation potential when considering other investment alternatives.

Historically, valuations have reflected future earnings growth potential and the main catalyst to move prices higher has usually been better visibility regarding the health of the U.S. economy. Although there are some recent economic trends to justify this relationship, there are still many unknowns regarding the speed and breadth of the recovery. The Fed has certainly distorted the discounting mechanism of the stock market through the monetary policy it has unleashed on capital markets. Their intent is to keep asset prices elevated and to give the economy time to recover and justify valuations.

U.S. small-cap stocks outperformed their large-cap peers for the quarter as some better than expected data increased the optimism for this more economically sensitive segment of the market. However, they remain significantly behind larger companies for the year. International equities have broadly underperformed U.S. stocks for both the quarter and year by wide margins as well. Much of this stems from the perceived safety of the U.S. equity market and dollar denominated assets in times of global distress. Within international markets, emerging market stocks slightly outperformed developed markets. This has been primarily attributed to China’s head start on reopening its economy as well as some surprises in its manufacturing recovery.

U.S. aggregate bond yields declined further from the 1st quarter to 1.25%. The drop in U.S. treasury yields to just 0.66% was the central cause. While yields for most segments of the U.S. bond market have declined in lockstep with the Fed’s purchases, the corporate, mortgage-backed and high yield sectors have been able to provide much higher yields than the broad U.S. bond market. Despite the extensive decline in U.S. bond yields, they are still significantly greater than most of the international bond markets where most of the debt yields well below 1% and in some instances are negative yielding as in the case of Japan and the Eurozone.

Given the poor visibility regarding the speed of the economic recovery and the potential for a rebound in corporate earnings in the quarters ahead, we believe uncertainty will persist. Volatility will continue in the quarters ahead especially as we near election season.

We are extremely focused on the earnings season ahead. The decline in earnings is expected to be dismal. However, we are interested to see if management can provide feedback on the stability of their supply chains, workforce, and changes in consumer habits. Also, their ability to provide guidance for the quarters ahead will be key in ascertaining whether the worst has passed.

During confusing and volatile times, it is always wise to have realistic time horizons and risk thresholds for your own personal situation and to ensure that you have crafted your investment strategy accordingly.

The best way to measure your investment success is not by whether you're beating the market, but by whether you've put in place a financial plan and a behavioral discipline that you are likely to get you where you want to go.

If you have created an investment strategy with realistic financial goals, it is imperative to not let your emotions or the media magnification influence you to shift from it.

WE ARE HERE TO HELP

Our advice is not one-size-fits-all. We will always consider your feelings about risk and the markets and review your unique financial situation when making any recommendations. If you would like to revisit your portfolio allocation, risk tolerance or overall financial plan, please call our office or discuss this at our next scheduled meeting.